On 21 February 2005 the Peace Community of San Jose de Apartadó suffered one of its most painful moments of the conflict when seven members of the Community and a neighbouring campesino were killed.

Among them were historic Community leader Luis Eduardo Guerra and his wife Beyanira Aleiza. Alongside their bodies was that of Luis Eduardo’s child, 11 year old Deyner Andrés, all of whom had been dismembered and left in the hamlet of Mulatos. Nearby in the hamlet of La Resbalosa, the family of Alfonso Bolívar Tuberquia, his wife Sandra Milena Muñoz, and their children, 5 year old Natalia and 2 year old Santiago, as well as Alejandro Pérez, a labourer on the farm, were all found assassinated and dismembered.[1] 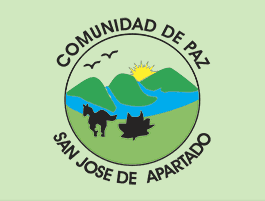 convicted by the Colombian Court of operating together with a paramilitary unit to carry out this crime. In March 2010, retired National Army Captain Guillermo Gordillo was sentenced to 20 years in prison as a co-author of the crimes of aggravated homicide, acts of barbarism, and conspiracy.[2] In June 2012, another four military officials were found guilty in the massacre as co-authors of the crimes of murder of a protected person and aggravated conspiracy.[3] However, ten years on, despite enormous international pressure, full investigations into the massacre seem to have come to a dead end.

In February 2015, the lawyer defending the victims in the case of the massacre in San José de Apartadó presented a citizens legal action (tutela) against the Procuraduría General de la Nación (autonomous body which controls and monitors the public function of state bodies) for alleged omissions regarding the massacre.[4]

In the ten years since this event the community have marked the anniversary with pilgrimages, religious ceremonies and memorial acts. However, commemoration of the tenth anniversary has been surrounded by ongoing human rights violations in the Peace Community, including the presence of armed actors.

The Peace Community of San José is a social organisation of over 500 rural farmers in the Urabá region of North-Western Colombia, who were displaced from their lands by a wave of violence between different armed actors in the 1990s and 2000s. They have managed to return to many of their mountain settlements by declaring themselves neutral in the face of the armed conflict, using an interpretation of International Humanitarian Law’s principle of distinction between combatants and civilians.

Since their foundation in 1997, they continue to face serious risks, due to ongoing conflict surrounding large scale commercial interest in their land, as well as from reprisals in response to the Community’s struggle to hold human rights violators to account. Since the Community’s formation in 1997, over 200 people have been killed.[5]

Days after the massacre in 2005, the then Colombian President, Álvaro Uribe Vélez, attempted to justify the massacre by saying some of the Peace Community members had links with the guerillas. However, eight years later, following a Constitutional Court ruling, the current President Juan Manuel Santos announced publically that Uribe’s accusations were a mistake.

In a public statement President Santos asked for San José de Apartadó’s forgiveness and stated that nobody should stigmatise “those who search for peace and reject violence”. He went on to say he held a “deep admiration and respect for the Peace Community” and regretted “all the accusations that have been made in the past against its good name.” [6]

In this vital moment of peace negotiations between the Government and FARC guerrilla forces, the case of the Peace Community of San José demonstrates the impact of the conflict upon rural populations, and the obstacles that remain on the path of achieving genuine and lasting peace.

Not least of these problems is how to ensure fair and sustainable development for these communities that have suffered so much throughout the conflict and finally have a chance to return to their land. International companies investing in Colombia will need to be very careful to ensure they are not investing in land belonging to farming communities like that of San José de Apartadó.

The lack of an accurate land registry and  correlations between fragile land tenure and human rights abuses mean companies will have to ensure due diligence if they are not to benefit from past human rights violations. Colombia also continues to face the challenge of how to deal with post-demobilised paramilitary groups (BACRIM) which continue to operate and carry out threats and attacks against human rights defenders.