COCOMOPOCA (Consejo Comunitario Mayor de Alto Atrato) is made up of 43 Afro-Colombian communities who under Law 70 (1993) made an application for collective ownership of their land title. They struggled for 12 years to have their land-rights  recognised. A struggle that saw them forcibly displaced from their territory and their leaders threatened and killed. They finally received their land title to 73,000 hectares in 2011. They  achieved this with support from ABColombia members Christian Aid, CAFOD and SCIAF, and their partners Pastoral Social, Tierra Digna and the Diocese of Quibdó.

It’s awful to live with so much fear. Guerrillas and paramilitaries killed people in my family. People watch and follow me. It’s hard to explain how bad the situation is. 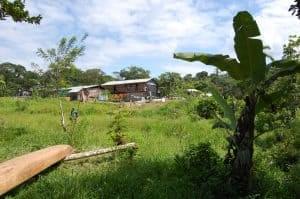 The communities of COCOMOPOCA reside along the banks of the river Andágueda in Chocó. In 1999 they presented their formal application for the collective land title to their ancestral territory, an extension of 172.000 hectares. Law 70 (1993), under which they were awarded their land, recognises their right to live in their territory according to their cultural customs and way of life. When they first applied for their collective title the COCOMOPOCA communities numbered 30,000 inhabitants, ten years later, there remained only 17,000 people.

COCOMOPOCA receive land titles to part of their Ancestral Territory

[…] with the handing over of the land title we are satisfied, we consider that we have completed the first stage…we are owners of a territory and we can say that we have succeeded with the help of many sister organisations and institutions that have helped us to take this step.

— Community leader from COCOMOPOCA Speaking in the UK parliament [1]

Having received their land title the communities of COCOMOPOCA found that there was a mining concession on their territory which covered approximately 55,000 hectares of their ancestral territory. This concession had been granted to Anglo Gold Ashanti, a company registered on the British Stock Exchange, without prior consultation with the communities and in contravention of Colombian legal procedures.

This is against the law. Legally you can’t give concessions until Afro-Colombian communities have received land titles and given their permission. We have opposed the decision but we haven’t received any answers yet. 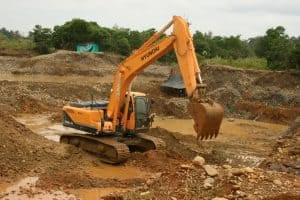 It is something that the communities have to pursue, and the International community to monitor to ensure that any concession in their territory conforms to Colombian law. For this concession to Anglo Gold Ashanti to be a legal concession the communities would first need to be consulted. A process that Colombia signed up to under the International Labour Organization – Convention 169 which requires  COCOMOPOCA  to give free, prior and informed consent to such a project.

However, this does not appear to be what the communities want. The legal representative of COCOMOPOCA, Américo Mosquera, stated “the president’s engine is going to crush us” [2]  he was referring to the National Development Plan which has five engines of growth one of which is extractives. The concerns of the 43 COCOMOPOCA communities are that AngloGold Ashanti will be allowed to develop the 55,000 hectare concession in their territory and that they will not be consulted on this.

In the case of collective land titles the anything above ground belongs to the communities but the underground resources belong to the state. According to the Director of INCODER Juan Manuel Ospina “this generates problems  … it can create conflict between the right to the use of the soil and the right to underground exploitation”. [3]

Well the reasons are as yet unclear but what is known is that Cocomopoca’s land [5] is rich in biodiversity – Choco is the second richest region in biodiversity in the world; located in a region permeated by rivers with a variety of fragile ecosystems.

Whilst there are plans in place to restore land to Colombia’s victims, at the same time the Colombian government – according to the National Development Plan – wants to encourage foreign investment and expand the areas of land used for mining and energy and agriculture and rural development, including export agro-industrial products. They are being rapidly pushing forward on all fronts before the victims have their land returned; as appears to have happened in the case of COCOMOPOCA and AngloGold Ashanti. The situation, whilst already complex threatens to become even more so, the restitution chapter of the  Victims Law 1418 Article 99 suggests that if an agro-industrial project has been developed on land belonging to the victims they are unlikely to get it back (for more detailed explanation ABColombia’s ‘Returning land to Colombia’s Victims’ 2011 Report).

Naomi Long MP from the Irish Alliance Party was one of the MPs who, alerted to the situation that Afro-Colombian communities like COCOMOPOCA were facing, tabled a question asking how the Secretary of State for Business, Innovation and Skills ‘would ensure that export development credits are not made available to businesses which require the use of land in Colombia until an accurate national register has been established’ which records the land titles of communities like COCOMOPOCA and others who have been forcibly displaced from their lands. If the UK supports businesses that take advantage of the land situation in Colombia, they could be supporting companies – unknowingly or otherwise – that are benefitting from human rights violations perpetrated against communities like those of COCOMOPOCA.

According to CODHES, by the end of 2010 there were 5.2 million persons internally displaced in Colombia, and more than six million hectares of land people have been forced to abandon. These people have a right to have their land restored to them. The recently introduced Victims’ Law 1448 of June 2011 contains a land restitution chapter which sets the framework for land restitution. This is planned to take place over the next 10 years (for further analysis and information on this Law see ABColombia ‘Returning land to Colombia’s Victims’ 2011 Report). It will only be possible to accurately record this in a land registry once land is identified and registered in preparation for restoration.

The ratification of the EU-CAN Agreement is ratified by the European Parliament in the current Colombian context it could intensify the human rights crisis as well as provide support to European companies and international investments to legalise land illegally appropriated from some of the poorest and most disadvantaged in Colombia, like the Afro-Colombian communities of COCOMOPOCA – the same communities who have borne the brunt of the Colombian conflict.  Rather than helping Colombia move forward it is likely that the European Union could find itself benefiting from the spoils of stolen lands obtained by gross human rights violations.

I am extremely grateful for the opportunity that I was given of going to Europe to explain our situation. I consider that this trip was one of the major things that helped us and pressurised [the government] into granting the land title quickly.

[5] Is geostrategically located close to various departmental capital cities (Antioquia Risaralda, Caldas, Valle and Quibdó), well situated for the major highway designed to link the Americas (the panamericana) and of vital importance to international market interests.