Valentine’s Day is the most important season for the flower sector in Colombia: more than 10,000 additional jobs are created and 14 February represents 12% of the total annual sales of the Colombian flower industry.[1]

Across Colombia, approximately 600,000 people directly or indirectly depend on floriculture. This industry is important for jobs and the economy in Colombia, but it can bring with it considerable suffering for those working in the flower industry. This is why it is important to buy fair trade flowers for Valentine’s Day. In that way you will support jobs, families, better working conditions and the health of workers. 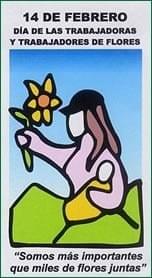 On Valentine’s Day, social organisations and unions around the world celebrate the International Day of Flower Workers as a way of recognising the contribution flower workers make to their countries’ economy. It is also an opportunity to demand better working conditions and a full acknowledgment of labour rights.

Colombia is the second largest exporter of flowers in the world after The Netherlands. It distributes thousands of flowers to its four bigger markets, the United States, Russia, United Kingdom and Japan. Between January and  October 2013, the UK imported approximately £18.5 million worth of flowers from Colombia. [2]

Many of the 100,000 direct employees working in this sector face violations of their labour rights, working very long hours for basic wages and in some cases risking their health.[3]

According to a report on Colombian floriculture by Cactus Corporation, in 2010, 42% of employees were contracted through temporary services agencies. These temporary contracts facilitate the dismissal of workers, who are not entitled to sick pay or maternity leave. This is particularly important given that 65% of the workers are women, many of whom are the heads of households.[4]

Diana, one of the women interviewed in the report, reported that from the 200 stems per hour they had to arrange two years ago, now the goal is set at 300, and workers who do not accomplish it could be dismissed. She and other women interviewed declared that the pressure and the workload have dramatically increased in recent years.

This pressure is even greater around Valentine’s Day, when many companies implement a system known as “4×4”: for four days employees work 20 hours and rest for just four hours.[5] The longer working hours to comply with demand during this period are usually not compensated.[6]

This tough working environment has considerable costs for the health of the workers, who often develop high levels of stress and are exposed to work related illnesses. For flower workers, these illnesses can include carpal wrist tunnel syndrome (CTS), respiratory problems, dermatitis and allergies caused by daily contact with insecticides.[7]

The precarious situation for workers has not improved during the flower sector’s 40 year existence in Colombia. Some practices of flower companies in Colombia violate national and international legislation on safety, social security, and labour rights.[8]

For several years, flower companies used Valentine’s Day to lobby for the ratification of a Free Trade Agreement between the US and Colombia. The agreement was signed in May 2012 and according to government figures, the profits in the flower sector increased from 690 to 740 millions of dollars in the first six months of 2013, representing a growth of 9%.[9]

However, the Free Trade Agreement has failed to improve the working conditions and rights of flower workers. “In the last year things have only gotten worse” says Aide Silva from UNTRAFLORES. According to a 2013 report by this union, the deterioration of working conditions is due to excessive pressure to increase productivity and attacks against unions.[10] Workers are often afraid to join unions for fear of losing their jobs, and as a result they are exposed to different forms of exploitation. UNTRAFLORES has seen their membership numbers decimated in the last decade, from 2,500 members to just 80 members.[11]

These conditions persist, despite the Colombian Government agreeing under the US-Colombia Free Trade Agreement negotiations to implement a Labour Action Plan (LAP). This Plan aims to improve the rights and conditions of workers and labour activists and was included to address concerns such as violence against union members; inadequate efforts to bring perpetrators to justice; and insufficient protection of workers’ rights.

The LAP explicitly prioritised flower workers and ordered regular inspection of their conditions.[12] However, according to a report by members of the Congressional Monitoring Group on Labour Rights in Colombia–US, the LAP has failed in its promise to carry out the inspections and improve the conditions and rights of workers.[13] This is concerning given the progressively more volatile circumstances and competition generated by the Free Trade Agreements. There are similar concerns that the human rights provisions agreed between the European Union and Colombia as part of their Free Trade Agreement, signed in 2013, will also not be implemented.

The precarious working conditions, lack of unions, and increasing demand as a result of Free Trade Agreements have meant that it is even more important to recognise and respect the rights of the women and men working in the flower industry. This Valentine’s Day, please think about where your flowers are being produced and the conditions of the workers who are producing them. Buy fairly traded flowers and join the different campaigns around the world to improve the working conditions of flower workers.

Find out where to buy fairly traded flowers in the UK.

[6] UNTRAFLORES, Report on the situation of workers in the flower industry in Colombia. 24 April 2013.

[10] UNTRAFLORES, Report on the situation of workers in the flower industry in Colombia. 24 April 2013

[13] The U.S.-Colombia Labor Action Plan: Failing on the Ground. A Staff Report on behalf of U.S. Representatives George Miller and Jim McGovern to the Congressional Monitoring Group on Labor Rights in Colombia. October 2013 http://democrats.edworkforce.house.gov/sites/democrats.edworkforce.house.gov/files/documents/Colombia%20trip%20report%20-%2010.29.13%20-%20formatted%20-%20FINAL.pdf