On 23 January 2019, ABColombia sent a letter to the Director of the National Protection Unit, Pablo Elías González Monguí, to express concerns about the security of an ABColombia partner, the environmental human rights defender and Zenú indigenous leader Irrael Solano Aguilar. You can download the full letter in Spanish.

We are worried about his security, given the high level of risk he is facing due to his human rights work as representative of grassroots organisations in South Cordoba.

Based on the information we have received from Mr Aguilar Solano, the car was taken for maintenance on 4 January 2019 and has not been returned yet. We would appreciate if you could inform us about the actions that the National Protection Unit is taking to return the car to Mr Aguilar Solano.

The Office of the UN High Commissioner for Human Rights has highlighted that environmental defenders face a particular risk in Colombia. According to the data of the Colombian Human Rights Ombudsman (Defensoria), at least 164 social leaders were killed in Colombia in 2018. As Mr Aguilar Solano is exposed to greater security risks due to his role as environmental defender and indigenous leader, we are quite concerned to hear that he has not got adequate protection measures at the moment.

We would be grateful for any action you can take to ensure that the car for the protection of Mr Aguilar Solano is returned to him as soon as possible. 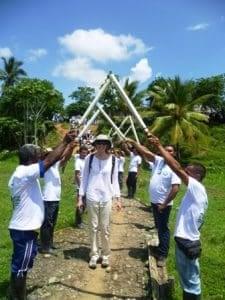 In 2009, the Colombian Constitutional Court ruled that there were 34 Groups of Indigenous peoples at risk of cultural and physical extinction in Colombia – one of those groups are the Zenú Indigenous Peoples (a partner of ABColombia). The Court stated that “(…) they have suffered horrendous violations of their collective and individual fundamental rights and have been the victims of breaches of International Humanitarian Law, which has resulted in collective and individual forced displacement.”

The Zenú Resguardo is composed of 47 communities, which are distributed across the San José de Uré, Puerto Libertador and Montelíbano. They received legal recognition of their territories in May 2014, after 14 years of petitions and procedures with the authorities.

In 2017, the Indigenous and Afro-Colombian communities in Cordoba, Colombia won a legal case against Cerro Matoso, a ferronickel mining company operating on their territory, for the violation of their fundamental rights. Irrael Aguilar Solano has been vocal in representing the voices of the communities in this case.

However, on Thursday, 21 September 2018, the Colombian Constitutional Court responded to an application by the Cerro Matoso S.A. ferronickel mine to nullify the compensation awarded to the communities for the damage to their health and told the company that it did not have to pay any damages or provide for an Ethnic Development Fund. However, the Court has confirmed that South32 must re-apply for its environmental licence, initiate procedures to address the environmental impacts of its operations and decontaminate the ecosystems they have polluted (air, soil and water).