ABColombia is seriously concerned about the increasing victimisation of members of the Zenú Indigenous Peoples, of the Alto San Jorge resguardo in Córdoba. In the last three months, three members of the Zenú Peoples have been killed, adding to the tally of 46 Zenú leaders and members assassinated since 2009. All these crimes remain in impunity.

In 2008 the Zenú community intensified efforts to obtain the land titles to their communal territory. This coincided with an increase in the number of killings of Zenú Peoples. For many years the Zenú Peoples have petitioned the Colombian Government to investigate and punish these crimes to no avail. Leaving them unpunished has created a culture of impunity that has fuelled further violence with ever increasing numbe 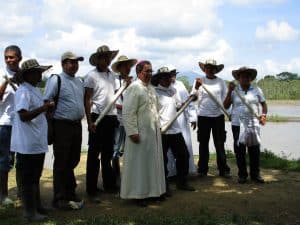 rs of the Zenú Peoples being killed.

In 2009, the Zenú were listed by the Colombian Constitutional Court as one of 34 Indigenous Groups at risk of physical or cultural extinction. In the same ruling, the Court ordered the Colombian Government to work with the Zenú community to design and implement an Ethnic Rescue Plan ‘Plan de Salvaguardia’ within six months. This did not happen.

The Zenú have also been raising the issue of the alleged impacts of the nearby BHP Billiton Cerro Matoso ferronickel mine and processing plant on the health of the Zenú People and the contamination of the environment. The mine was formerly owned by BHP Billiton, and since 2015, by South 32 (both UK registered companies).

In November 2014, Irrael Aguilar Solano, Governor of the Indigenous Zenú Territories, visited the UK and informed members of the UK Parliament of the dangers faced by his community, and his anxieties regarding the inaction of the Colombian State in relation to these dangers. Concerned to hear of the precarious security conditions for the Zenú Peoples, MPs wrote to the Colombian Ambassador to the UK in February 2015 and representatives from the British, French and Belgian Embassies have all visited the Zenú Peoples’ territory in 2015.

The Zenú Peoples received a commitment from the Colombian State to provide collective protection measures due to their precarious security situation over 18 months ago in December 2013. Despite growing  international concern for their safety, the National Protection Unit (NPU) still has not implemented these measures. The NPU cites budgetary constraints as the principal reason for their failure to fulfil their obligations. It is critical that the Colombian Government ensures that the funding is in place and concrete steps are taken to implement both collective and individual protection measures for the Zenú Peoples.

ABColombia recommends that the Colombian Government:

ABColombia is a beneficiary of a grant from the European Union for the Programme ‘Protección y visibilización de Defensores de DDHH en Colombia’. The contents of this statement are the sole responsibility of ABColombia and can in no way be taken to reflect the views of the European Union.