You are here: Home / News / Results of the Colombian Congressional Elections 2018

The far-right Centro Democrático (Democratic Centre), ex-president Álvaro Uribe Velez’s party, won the largest number of congressional seats with 19 in the Senate, and 33 in the House of Representatives. This right-wing party is critical of the Peace Accord and has said that it will not implement all of the agreements. It is supporting the Presidential candidate Iván Duque. The Partido Cambio Radical (Party for Radical Change) doubled its number of seats in Congress – this is the Party of presidential candidate, Germán Vargas Lleras.

The Partido Conservador (Conservatives), Partido Liberal (Liberals) and the Partido de la U (Party of National Unity) took a loss. The Partido de la U, President Juan Manuel Santos’ party, lost its majority in the two Houses dropping from 21 Senators to 14, and from 27 to 25 seats in the House of Representatives. However, overall, these three parties did not loose as many votes as was expected, and have held on to 45% of the Congress.

The parties on the left, La Alianza Verde (The Green Alliance), Polo Democractico and La Decencia, supporters of the implementation of the Peace Accord, together gained about 20% of the seats in Congress. La Alianza Verde went from having 5 Seats in the Senate to 15 and from 6 to 9 seats in the House of Representatives. It is supporting Sergio Fajardo in the Presidential Elections.

FARC candidates gained less than 0.5 percent of the overall vote. That means their political party, Fuerza Alternativa Revolucionaria del Comun (Common Alternative Revolutionary Force-FARC) will only get the 10 seats guaranteed to them in the Peace Accord, five seats in the 108-member Senate and five in the the 172-member House of Representatives.

Antanas Mockus won the second largest number of votes of any of the elected candidates. Due to the work he did when he was Mayor of Bogota, he is associated with working against corruption. This is something that many of the voters want to see addressed in Colombia.

Colombia will hold Presidential Elections on 27 May 2018, the conservative candidates in the running that have been critical of the Peace Accord with the FARC are Iván Duque from the Centro Democratico and Germán Vargas Lleras from the Cambio Radical. Although Duque has moderated his stance on the Peace Accord more recently, saying that he would only modify certain elements of it, such as the provision that allows the former rebels with drug-trafficking convictions to participate in politics.

At the moment, according to the polls, the two main contenders for the Presidential Elections in May are Gustavo Petro from the left, and Ivan Duque on the right. If ex-president Uribe’s choice, Iván Duque, wins the presidency, he would need a coalition of at least four parties for a governing majority, whereas if Gustavo Petro, of the Progressivists Movement party, won the presidency, with a united left in Congress, he would have to govern with a minority. However, he would still have an opportunity to process the Agreements in the Peace Accord given the number of votes in the Senate from the parties that supported the Agreement.

Table below was produced by Adam Isacson: 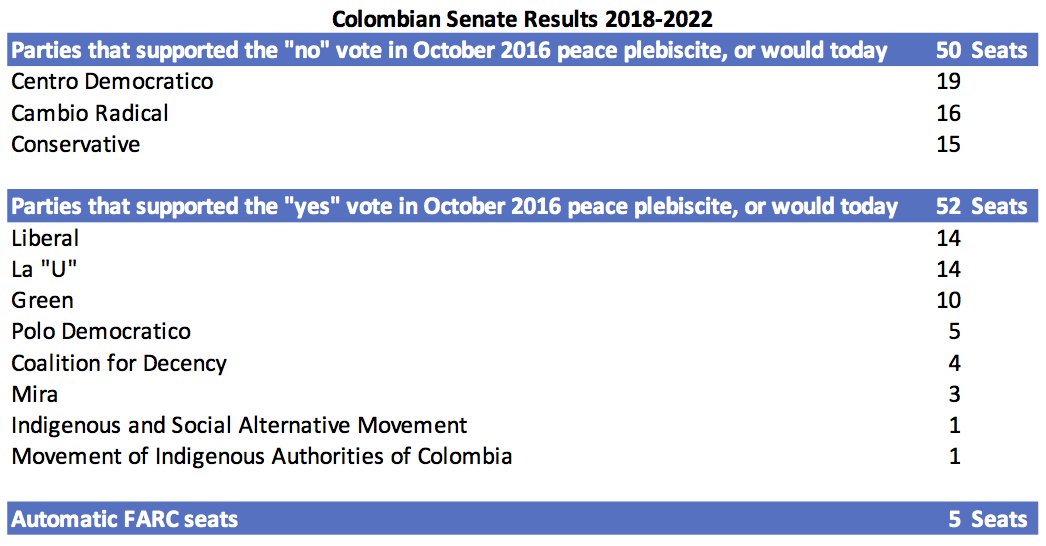