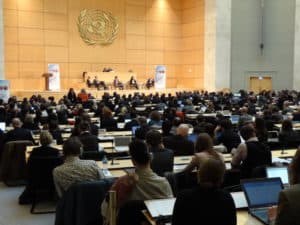 On 22 September 2017, the United Nations Mission in Colombia announced the successful ending of the phase of laying down of arms and decommissioning of FARC weapons, under point 3 of the Peace Accord “Ending Conflict”. In total, the FARC have laid down 8,994 weapons. These have now been collected from the Transitional Local Zones for Normalization and Transitory Points and have been decommissioned. The number of arms caches seized by the Public Security Forces, together with those decommissioned by the UN Mission and FARC teams, numbered 1,101. All deactivated armaments and the remains of the destroyed ammunition will be used to construct peace monuments.

The FARC has now moved from an insurgent group to a political party, the Common Alternative Revolutionary Force (Fuerza Alternativa Revolucionaria del Común), and its members are being reintegrated into civilian life.

The implementation of the peace agreements  is progressing with the creation of several institutions outlined in the Peace Accord, including those designed to identify and prosecute the intellectual authors and financial backers of paramilitarism. On 3 September 2017, the leader of “Clan del Golfo”, the largest of the neo-paramilitary groups in Colombia, said they were willing to discuss handing themselves over to the Justice System.

Civil Society Organisations Crucial for the Consolidation of Peace

Civil society organisations (CSOs) have an important role to play in the consolidation of peace. The Peace Accord established the CSIVI, a Commission to monitor the implementation of the Peace Accord and resolve any disagreement that may arise between the government and the FARC during the process of implementation; the Commission also has a verification component. ABColombia partner CINEP was asked jointly by the Government and the FARC to take on the role of Technical Secretariat of the CSIVI. This is a jointly held post by CINEP and the Conflict Analysis Resource Centre (CERAC)

The Peace Accord also tasked CINEP along with two other organisations (Foro nacional por Colombia and Viva la Ciudadanía) to write a bill to be presented to Congress drawing on the discussions in Havana. The concept of this law is based on widening civil society participation (see  Point 2.1.1. of the Peace Accord for further information), promoting adequate conditions to protect the right to social protest and other activities that social organisations undertake in the context of a democratic society, as well as, taking into account the needs of civil society in terms of peace-building.

Threats to the Consolidation of Peace

There are a variety of serious threats to the consolidation of peace in Colombia, in addition to needing a Peace Deal with Colombia’s second largest guerrilla group – the ELN, it will be essential to dismantle the neo-paramilitary groups which continue to operate in Colombia. Paramilitary groups are responsible for the majority of the violence against rural communities and human rights defenders.

Other major factors posing a threat to the consolidation of peace include: the apparent lack of action by the security forces in some regions of the country to protect communities from these illegal armed groups (notably, along rivers like the Rio Quito, where afrodescendant communities live in collectively owned territory and the San Juan and Bajo Calima rivers, where the Wounaan Indigenous Peoples live); the continued and increased attacks and killings of human rights defenders; and tackling the Humanitarian Crisis facing areas like Chocó, where important basic services are extremely poor or none existent. In those areas, there is a desperate need for healthcare services, education, clean water, as well as, security and local infrastructure to be addressed. Areas like Chocó have received numerous promises of more investment to build hospitals that are equipped to offer better health care services but as yet these go unfulfilled.

It will be essential for the UK, the EU and other countries to focus on creating the conditions for peace to prosper by ensuring that along with the financial support for consolidating peace they provide financial and political support to CSOs that have consistently struggled throughout the conflict to uphold the rights of others. It is these organisations that can now offer expertise in policy design and implementation, monitoring and evaluation. Civil Society Organisations are well placed in some of the areas most impacted by the conflict to support, monitor and verify the implementation of the Peace Agreements.