You are here: Home / News / Valentine’s Day is International Day of Flower Workers

It’s Valentine’s day: a time to show love and gratitude and maybe buy some flowers. Valentine’s day is also one of the busiest periods of the year for flower workers in Colombia, who often face unhealthy working conditions to supply the demand in the UK.

On Valentine’s Day, social organisations and unions around the world celebrate the International Day of Flower Workers as a way of recognising the contribution flower workers make to their countries’ economy. It is also an opportunity to demand better protection of labour rights in the flower production sector.

Colombia is the second largest exporter of flowers worldwide, and the UK is an important customer. The UK yearly spends millions on imported cut flowers. In its latest figures the UK government’s Department for Environment, Food & Rural Affairs showed that the UK spent £160.1 million on imported roses and a further £47.1 million on carnations in 2016. Over £31 million was spent on Colombian produced flowers. However, in order to supply the UK consumers’ demand, the industry’s workers in Colombia often face precarious work contracts, human rights violations and unhealthy working conditions. 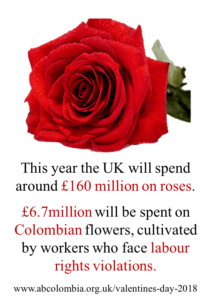 The Colombian floriculture market employs approximately 90,000 people directly and a further 40,000 people indirectly. However, these numbers are not enough to meet the foreign demand for fresh cut flowers. In 2011, an average of 15 employees worked per hectare. This number has diminished to only 13.9 workers in 2015, with the numbers still decreasing. This contrasts sharply with the constant increase in hectares delineated for floriculture in the last five years. So, with fewer workers per hectare, workers are required to be more productive, to do more.  This tough working environment has considerable costs for the health of the workers, who often develop high levels of stress and are exposed to work-related illnesses. For flower workers, these illnesses can include carpal wrist tunnel syndrome (CTS), respiratory problems, dermatitis and allergies caused by daily contact with insecticides.

To meet these increasing demand, many Colombian floriculture companies have put in place points or bonus schemes to keep their companies ‘competitive’. For very little benefit, workers are required to up their productivity 100%, processing 400 stems per hour instead of the usual 200 stems per hour. To give some context into how pressure on workers has increased in the last 30 years, in 1980 a worker in the company Cardenal oversaw 15 flower beds; in 2018 this has changed to 100.

Many organisations and unions, such as Sinaltraflor and Sintrainagro, are working with employees to fight for their rights. Corporation Cactus has issued many reports on human rights violations within the floriculture sector. Asocolflores, the Colombian national union for flower workers, has instigated a Florverde certification system, which assures the production of flowers within conditions that benefit the community.

However, as of 2015 only 38% of flowers were branded with the Florverde certificate. Additional to this, Corporation Cactus has emphasised the stigmatisation of trade unions within Colombia, meaning that the potential of unionisation is never reached. Workers who join unions to mobilize face dismissal, as was the case with numerous employees for the company Sunshine Bouquet who, at the start of 2016, were dismissed for associating with workers’ unions. Even the International Trade Union Confederation has said that within Colombia there is ‘no guarantee of rights’.

As the world’s 3rd largest flower importer, the UK has considerable influence over the global floriculture market. By choosing to only import or buy Fairtrade, Rainforest Alliance or Florverde[1] flowers from Colombia, the UK and UK consumers can support employers who respect workers’ rights and provide just employment.